Make your stamps work for you.....

I worked on putting together the new Stella WOTG kit that will be available February 1st. over the weekend. I don't own the Token alphabet set they used, but liked the looks of it. I thought "self, what can you use to get a similar look"? 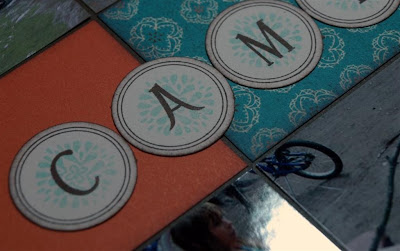 I found a 1 1/4" circle sentiment in the Blue Ribbon set. Here is the stamp before I did my handy work. Pretend you don't see the cut lines. 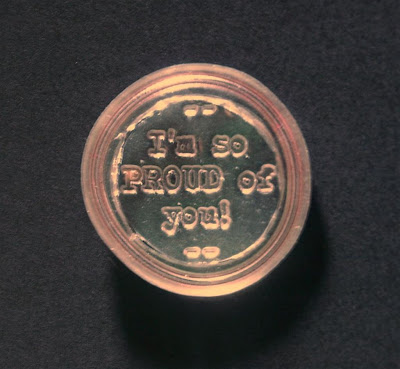 I only wanted the circle frame so that I could stamp the letters in the middle. I took an exacto knife and carefully trimmed out the inside caption. This is easiest if you stick the stamp on a glass mat. Then I had this.... 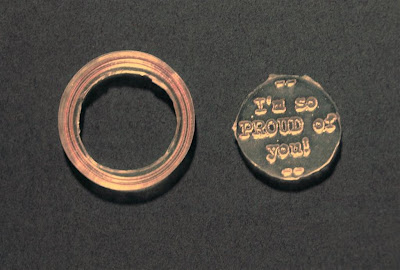 I saved myself $30 by using a small alphabet set I had and doing the little trick above. The stamp can still be used the way it was originally intended, or now I can use the caption by itself, or the circle by itself. 3 looks for the price of 1!

Whenever I am looking at which stamps to buy, I really focus on the shapes, edges, etc. I like to know I will be able to use it for several projects. I can hardly wait to finish up the Rock the Block workshops so I can cut them ones apart. There are some really cool frames in that set.

I will show you the rest of the layout tomorrow. If I am ever going to keep up with my goal of blogging EVERYDAY in 2012 I have to think my posts through.

I want to throw this little story in here, so I remember to scrapbook it. You see, this is my little journal as well. We were sitting at the dinner table a few evenings ago. Zane found a stack of fishing pictures. I am sure you can imagine my excitement.... He was telling Tyler, Emily, and I all the details of the photos. Where this one was caught, how long this one was, how much this one weighed, you get the picture. All of a sudden, Emily looks at me with a little smirk on her face. She says "Daddy, how much did I weigh and how long was I when I was born?". I about fell off the chair! Emily giggled as he threw out some numbers that she and I both knew were incorrect before they even came out of his mouth. Poor Zane, Emily beat him at his own game. Now I have a perfect story to go with that big Walleye!

Email ThisBlogThis!Share to TwitterShare to FacebookShare to Pinterest
Labels: How To Tutorials